Nihon teria history
Someone once wrote that the race Nihon teria is recognized by the FCI (International Kennel Club Federation) since 1932. Unfortunately, this one misses the truth.

According to my Japanese sources and the informations I got from Mrs. Yoko Obayashi, the breeder of this breed in Japan, 1932 is an important date, but then the club of Nihon teria race was founded in Japan. It was the only club of the breed throughout history. This club has worked 20 years ago. But today, only a few Japanese publications mentioned it.

The first chairman of the club was Tamura Kikujiro from Japan. While the first publication about the breed was established in 1938 in Tokyo, written by Seikoukan „『日本犬の研究』” , translated into English known as “Research of the Japanese dogs”. This book described the origins of the breed Nihon teria, and the author and source of information about it was the same Tamura Kikujiro.

The origins of the breed were not easy. Dog, which was originally derived from a breed of Nihon teria was KURO, which was the result of crossing two breeds: English Toy Terrier and Toy Bull Terrier. Kuro was born in 1913 in Kobe. Kuro was black and tan terrier, with white markings, he had thin and strong legs, erect ears, large eyes and round
head.

When KURO was 8, he moved to Osaka. 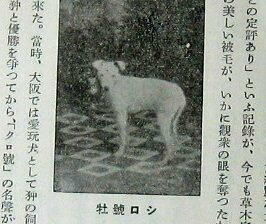 The next descendant of the race Nihon teria was born in Kobe in 1918. His name was SHIRO, was the son of KURO and KAME (female shorthaired fox terrier that existed in Japan under the name of the breed terrier kobe). SHIRO was bright white, it was a very intelligent dog, measured 36 cm in height, had a beautiful coat and a tiny tail. SHIRO was presented at the National Dog Show in Kobe in 1919, during which he was considered as terrier. SHIRO was very enthusiastically greeted by the audience watching him. 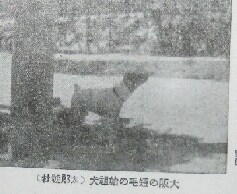 KURO was eight years old as he moved to Osaka in 1921. In the same year KURO and female MERRY (short-haired Kobe terrier, black, tan head, black spots on white fur, which was raised only in Osaka) had descendants named TAROU (Mr. Yamazaki’s breeding). It was a dog that looks very similar to the existing specimens of this race and was regarded as one of the ancestors of the breed Nihon teria. TAROU came from a pure breeding line from TAROUGOU and EDOGIKU breeding and so was close to ideal. 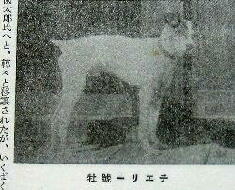 For the next seven or eight years, breeders in Japan have tried to create the ideal of a new breed. In March 1928 CHERRY was born, whose father was just TAROU. In the same year, Cherry moved from Osaka to Kobe. 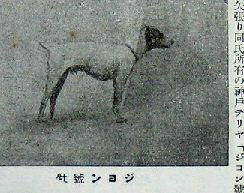 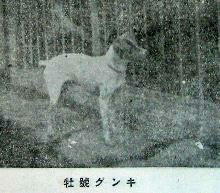 In September 1929 JOHN was born in Osaka, a descendant of a dog namedMARY and female QUEEN (Kobe terrier from Mr. Kobayashi).

The real step forward was the year 1930, when most dogs are born, which gave rise to the current line of our race. 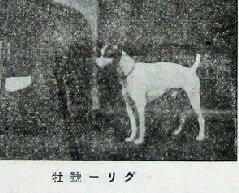 In January 1930 GREE was born in Osaka, the father was TERREY and mother JOHN (breeder Mr. Kato). It was a dog that has preserved the original line from KURO. 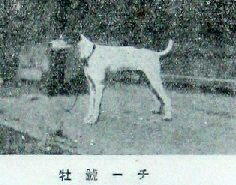 On the 27. March 1930 CHEE also was born in Osaka, his father was TERREY, and the mother HUKU (kobe terrier). 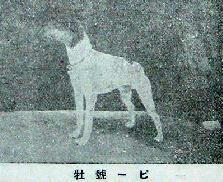 In April 1930 PEE was born, his father was CHERRY, mother Puris (same line as KURO), who moved to Kobe. 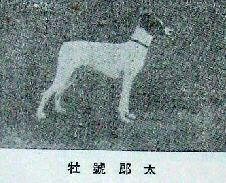 In May the same year TAROU was born in Osaka, a combination of HERO and female MERRY (kobe terrier). TAROU was one of the dogs from the line Kojirou that existed in the Chugoku. 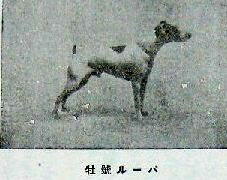 August 1930 was the month of birth of PEARL, who was born in Osaka.

In November 1930, in Osaka, was born female JACK. This girl belonged to Tamura Kikujiro. JACK is considered to be the closest to the ideal of Japanese terrier dog (Nihon teria), which gave rise to the current
version of our race.

Two years later was grounded Nihon teria Club in Japan that set standards for the further development of this breed.

Important dates:
1911 – FCI was founded (International Kennel Federation)
1930 – in the breeding of Mr. Tamura Kikujiro was born female JACK, the closest to the ideal of Nihon teria
1932 – Nihon teria club was formed in Japan and the first breed standard (chairman of the club was Tamura Kikujiro)
1948 – JKC was founded (Japan Kennel Club)
1964 – on the 1st of Aprli JKC recognized nihon terrier as a dog breed and classified it in the dog base
1973 – on the 9. May this year, JKC sent to FCI the firts breed pattern translated into English
1979 – JKC was a member of the FCI and this year is considered as the year of approval of the Japanese breeds by the FCI

The first Nihon Teria standard in English published on the 9. May 1973 by the FCI you can see HERE.