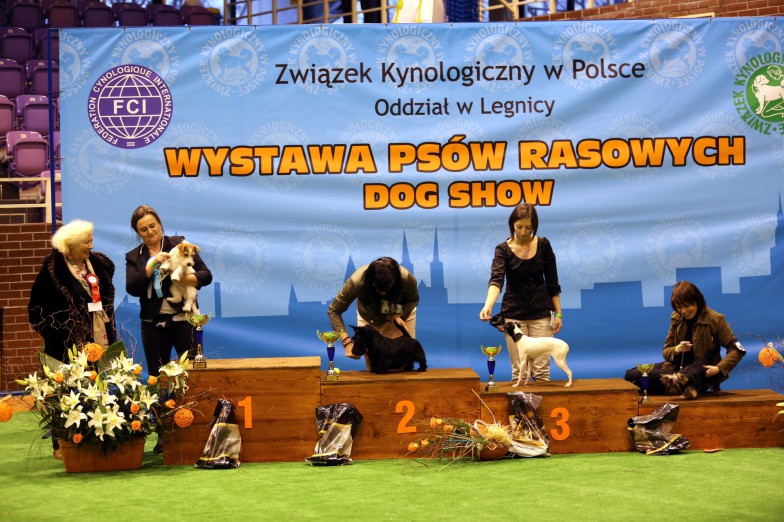 In just five days apart we took part in two shows. The first one took place in Sosnowiec on January 19 during National Dog Show, five days later we went to Głogów on International Dog Show.

In Sosnowiec, we decided to present our youngest Japanese terrier, Fuji. Our judge was Mrs. Magdalena Kozlowska. Fuji presented in the ring very nicely, went and flexed beautifully on the table. We were very proud of her when she received a very promising note and Best baby. Of course, for her, we were on the BiS. Fuji gains more experience with every presentation. The more, the same as a week earlier in Brno, Fuji was very stressed on the ring of honor and did not want to show what she really can do.

But as you can say in Poland, third time lucky. A few days later we went to Głogów. There we showed Fuji and after the two-month break also Bayka. Our judge was Mr. Michael Leonard from Ireland. First in the ring presented Fuji. She went nicely, using her beautiful, very stately step, made ​​a couple of laps, beautifully stood on the table. The judge really liked it. Fuji has already received her third title of the Best Baby! The next presentation was Bayka and she was very professionally. Bayka showed what is best in the ring and on the table. The judge had no doubts and gave her BOB, which also started Polish Championship. After judging he admitted that he liked more female-type like Fuji and for the first time he had seen this breed on the eyes. We really liked the fact that the judge had the breed standard and he used it in assessing and judging.

Traditionally, we stayed for Fuji on BIS. Just before the entrance to the Best in Show Baby, Oktawia with Fuji practiced a lot. And it resulted in a walk in the ring of honor. For the first time, Fuji showed what she presents during the evaluation in the ring. With very stately step she passed the ring of honor, she stood beautifully and also appeared on the table. We were very proud of her. This presentation also loved the judge – Mrs. Margaret Furlong from Ireland, who pointed Fuji on third place among eight most beautiful babies! It was certainly a huge shock for us, but at the same time confirming that Fuji is a dog for the show!

Then we presented Bayka. Our judge came from Serbia, because it was unlikely that he had ever seen such rarely breed as Nihon teria. Oktawia showed Bayka very nice, but unfortunately, not enough to impress Mr. Rade Dakić Kica.

Next show is just in two weeks.