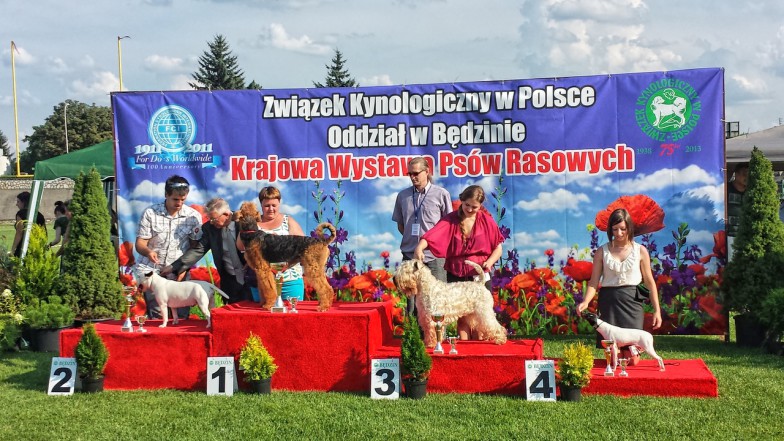 On the last weekend of July were organized two shows in Będzin : National Show of the III FCI group and the National Dog Show. Our Japanese terriers took part in both of them.

On Saturday was organized the National Show of the III FCI group. To compete joined debut in junior class, celebrating her first birthday that day, Fuji and experienced, two-year Bayka. The judge was Mrs. Maria Zasada. Fuji as befits newcomer, showed up very nicely, winning JBOB, while Bayka presented everything that is best to give the BOB. Thus Bayka became Polish Champion, and Fuji launched Polish Junior Champion. Unfortunately, we didn’t win on BIS.

A day later, during the National Dog Show we showed Fuji and Keru. The judge was Ms. Lucyna Juzwa. Fuji presented beautifully that day! In addition, the judge really liked her. Fuji received JBOB. Keru like a pro received BOS and both dogs were waiting for comparison. Here a huge surprise, since the judge very long wondered about the verdict. Fuji got BOB! For us it was a shock, but it did not surprise us that Fuji impressed the judge.

The judge on BOG was the same judge who the day before had not noticed Bayka on BIS – Mr. Bill Leslie from Ireland. We were very surprised when Fuji as the third best qualified for four Terriers at this show. This meant that we’ll be on the box. And so Fuji next to much more popular breeds, stood on the box. This is a historic success, because very rarely Terriers Japanese count in the competition of the most beautiful terriers. We are very proud of her!

For Keru and Bayka it was the last test before the World Dog Show 2014, which will show the new world winners among the Japanese terriers on the 9th of August. Fuji is taking part in the International Dog Show in Zakopane on the 2nd of August.