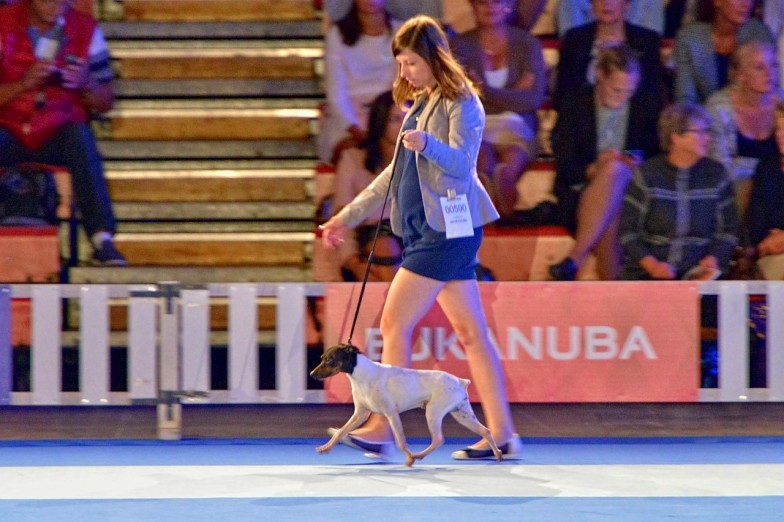 Keru, Fuji and Tsubasa, and c.a. 17 thousand other dogs, participated in this years European Dog Show in Oslo, Norway.

A week before the show Fuji came into season (heat). It was really bad information for us because we know how our dogs behave during bitches’ heat – we were afraid of their performance.

We had very demanding judge Dan Ericcson from Sweden. For him dogs have to walk perfectly to get perfect grade.

We tried to separate our dogs but they had in mind and felt Fuji’s heat. It was really hard to control them. First to the ring went Tsubasa. He did not listen to us at all, walked uncontrolled and unrestrained, was afraid and didn’t want to stay still at the table, he was very distracted. The judge had no doubts that he did not deserve to get the title. We expected bad grade but we were shocked when Tsubasa got very bad – Sufficient. Now we are sure that there is lots of work in front of us and the bloody heat at bad time…

Keru was the next at the ring. I really do not know how Oktawia did this but she took control over him and he showed himself really good. The judge from Sweden liked him very much and gave him all – including 2015 European Winner title.

Next one was Fuji but she behave kind of strange, she was not herself during the heat. Nevertheless she presented herself really good and also got 2015 European Winner. Two our dogs competed to get BOB. This time I took control over Keru who according to judge was better and got BOB.

Besides of European titles Keru and Fuju became Champions of Norway. We are sad for Tsubasa, we think that if Fuju didn’t came into season, Tsubasa would get more. But we know that there sill is lots of work in front of us.