Menu
Keru is the Caribbean and Americas winner! 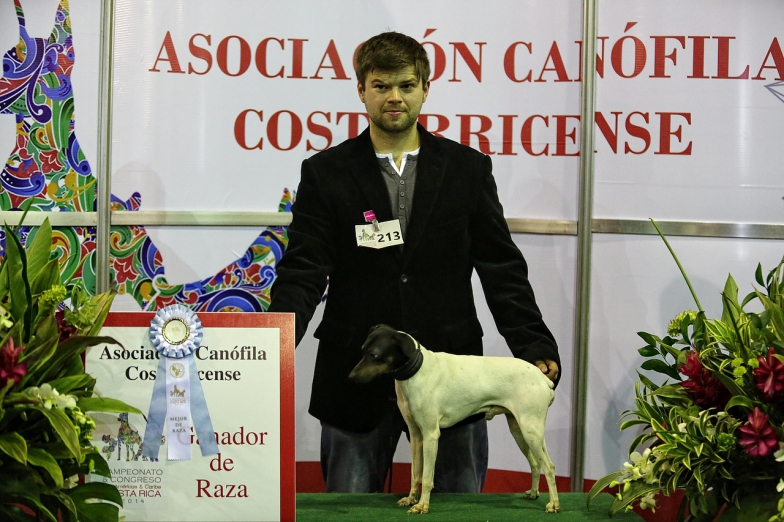 At the end of November 2014 in the capital of Costa Rica – San Jose was held an international FCI show – FCI Americas and the Caribbean Section Dog Show. Costa Rica slammed the most beautiful dogs from both Americas, as well as several representatives of the Kennel Club from Europe.

Since I love exotic trip with a dog, I decided that this time we will take part in this year’s international show. In this show season I was with my terrier Japanese – Amakakeru-Mieji White Oleander (Keru) in Tokyo at Asian and Pacific Winner, where we won the Asian Winner; in Helsinki at the World Dog Show, from which I came back with the World Winner title and as well as in Brno at the Euro Dog Show, where we were able to win the European Winner title. For the full year’s pool I just missed the Americas and the Caribbean Winner.

I made an initial decision almost a year ago. At that time there was a problem. Namely – transport. Directly to San Jose from Europe fly only two airlines Condor from Frankfurt and Ibieria from Madrid. Condor had a big restriction on the dog on board. The main problem was to reduce the weight of the dog-related with transport. These airlines allow a maximum weight of 6 kg, while my dog along with the conveyor weighed just over 7 kg. Thus, the Condor was eliminated at the start. Ibieria while checking the connection was not very attractive price. Therefore, I decided that to resign from the trip to this show.

Almost a year later, less than three weeks before the show, on one of the social networking sites I noticed a graphic that was promoted FCI Americas and the Caribbean Section Dog Show 2014 and I decided to try again. With the help of a friendly travel agency I found quite interesting connections to Costa Rica. Namely, I had three options: the first was by Mexico, the second by Canada, and the third by the US. As I had to fly with my dog on board, the option by the United States was not an option, due to the limitations of the United Airlines. I decided to pre-book two tickets. The first route through Toronto, the second through Mexio City. And here began the stairs. As it turned out, Air Canada, which was to execute the connection from Toronto to San Jose, both in the first free time, and in the second one, had dogs set on board. To the connection through Mexico, even though I had initial reservations, my dog wasn’t confirmed. Only less than a week before the scheduled departure, the airline performing the connection from Mexico to Costa Rica – Avianca Airlines confirmed my dog on board. From that moment my departure plans gained momentum.

I reported my dog for all possible accompanying shows and the international show. Interestingly, even when the adult dog is a champion of many countries, and it is not a champion of Costa Rica, he may be reported only to the open class in Costa Rica. I could not report the dog to the intermediate class and the working class. The organizers have posted a very modest information oabout the show and in addition, only in Spanish. I only knew the judging panel and how much is the registration fee. With the help of friends, on one of the social networks I was able to “meet” the main organizer of the show, the President of the Costa Rica Kennel Club – Mr. William Rodriguez, who answered all my questions. As I knew everything I needed and having the confidence that Keru has been properly reported to the shows, I could go ahead and fly to Costa Rica.

The trip with the dog to Central America was associated with an additional deworming, heartworm protection, basic clinical tests and certificate from the District Veterinary Inspectorate. Both Costa Rica and Mexico did not require anything more.

I set out to San Jose on November 26 from the airport in Krakow. I had two stops. First in Frankfurt, the second in Mexio City. I arrived to San Jose after 34 hours of travel. When I arrived at the hotel, I found that the show begins at the next day at 9am. Me and Keru were extremely tired and had to relax.

The show began on November 28 at the National Theatre – Teatro de La Aduana. The organizers have prepared five rings, one of them was the ring of honor.Each ring, at intervals, was even judged by four judges. Each exhibitor, along with his dog, was able to participate in maximum of seven shows: three international shows, including the main continental show; three national shows and speciality show.

The panel of judges was excellent, to San Jose arrived judges from five continents: North America, South America, Europe, Africa and Asia. So that the organizers could grant a new title recently approved by the FCI – Intercontinental Champion. It was the first show in the world where you could win this title. In fact, it was not difficult, because enough that the dog got an excellent note during one of the shows organized in the framework of the FCI Americas and the Caribbean Section Dog Show 2014.

In each show took part a little over 400 dogs. There was one main directory and an additional directory for speciality shows. 90% all exhibitors were professional handlers. Judging was done very well, the judges did not give descriptions, only admittes assessment and titles.

In the show took part mostly dogs registered in the countries of the Americas. There were also several representatives from Europe, but there were dogs mostly from Mexico, Brazil and Costa Rica. In addition to my Keru, one more dog from Poland was also reported. It was Japanese chin – Itami Ito Akwamaryn, whose owner Mrs. Danuta Sarnecki lives from many years in San Jose. The exhibitors from Lithuania came also to Costa Rica. The marriage Ilze and Andrej Fraim, with their beautiful miniature intercontinental spaniels – Phalene.

The level of competition was varied. Depending on the breed, were more or less filled. Most representatives were English Bulldogs – until 45 dogs. Wordl handlers were running with the dogs rin the rings. They had been taking care of the dogs winning the competition at World Dog Show, American or Cruft shows. In the terrier group I was probably the only one who sees the dog show as a hobby. The other are professional handlers with perfectly prepared dogs, for which exposure is simply a work. Hiring the handler for local shows is associated with the cost of a few dozen to a few hundred dollars for one output in the ring! I thought about hiring one of the handlers to help me show Keru in the group, but the amount I heard knocked me off my feet.

We managed to win that, why we came to Costa Rica for. On the main show our judge was the President of the Asian Kennel Section, Mr. Augusto Benedicto Santos III from the Philippines. I admit that I did not expect such a professional approach to judging. The judge was very kind and also very nice. Keru received BOB and the Winner of the Americas and the Caribbean, as well as beautiful opinion about him. Thus, he is probably the only dog in the world, which has all continental FCI titles, ie.: World Winner, Asian and Pacific Winner, European Winner and Americas and the Caribbean Winner. He is also the first dog in the world, which won the title in all these one season.

And the winner of the entire show FCI Americas and the Caribbean Section Dog Show 2014 was a three-years old Poodle black, registered in Peru, this year’s BIS winner on Crufts – Ch. Afterglow Maverick Sabre (owner: Ilaria Biondi de Ciabatti) in the hands of a handler Konstandinos A. Pavlopoulos. Second place went to the five-years old Boxer from Brazil – Draco’s Bonfire, and the third place took the seven-years old Afghan Hound – Fashionista of Damos from Mexico.
After the show, I had at the end one the day off, and I could do some sightseeing. I went on one of the inactive volcanoes to admire the Costa Rican flora. Costa Rica is famous for its beautiful plants. During sunny weather the green of the country looked fantastic and the views were amazing.

The next day I had a plane to Mexico, where I waited a total of 41-hour journey home. The trip lasted eight days, with more than three spent traveling. However, I will not forget this trip.