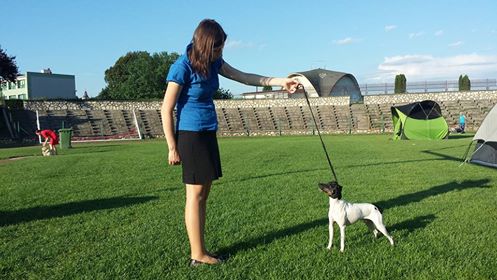 The turn of July and August was the best time for trainings before the Euro Dog Show. We were on three different shows with Tsubasa.

The first one was International Dog Show in Konopiska on July 23rd where our judge was Maria Zasada. Tsubasa showed himself really fantastic. Stood great at the table and looked great in the ring so he deserved for BOB. In the honor ring he also did great job but was unnoticed by the judge.

One week later we went to Będzin on National Dog Show. Our judge was Adam Stasiak who gave Tsubasa BOB after great presentation of our dog. But once again it was not enough to be noticed in the honor ring.

Same situation was during the National Dog Show in Bytom on August 13th. Tsubasa got BOB from the judge Monika Kuriata-Okarmus but it was not his best show. It might have been because of chaotic judging plan. I had no enough time to take control over the dog because we had to go to the ring. In the honor ring we did not expect any success because the judge didn’t even know what breed is Tsubasa. Even though these inconveniences Tsubasa showed himself really good.