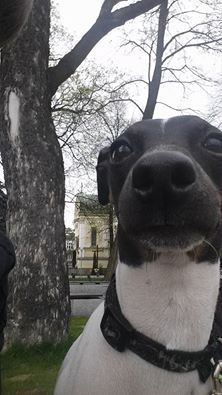 On Sunday, April 17th I decided to take Bayka and Tsubasa to national dog show in Zakrzow. Our judge was Agnieszka Nowak-Patyniak. Oktawia also decided to go with us and took our son Gabriel. It was her first handling after 7 month break.

First on the ring was Tsubasa. He did great there, little worse at the table. He was feared. Despite of that, the judge managed really nice with him and gave him CAC – so this way he started Championship of Poland.

The second one was Bayka. She was good at the ring, but on the table she was really afraid. We think it’s because of the 18 month break from dog shows. She got CAC too, but BOB went to Tsubasa.

We stayed at BIS contest. There was a chance to achieve success with good presentation. Once again Tsubasa presented himself really nice. He stood firmly and still, the judge hesitated to place him on the box. She decided to walk over him, knowing that this fainthearted breed. Tsubasa made two steps back and this resolved doubts of the judge. Tsubasa was distinguished because he was the only one the judge walked over to.

This indicates that there are still at least couple of months of hard trainings ahead of us and that Bayka needs few more shows to get back to full form.