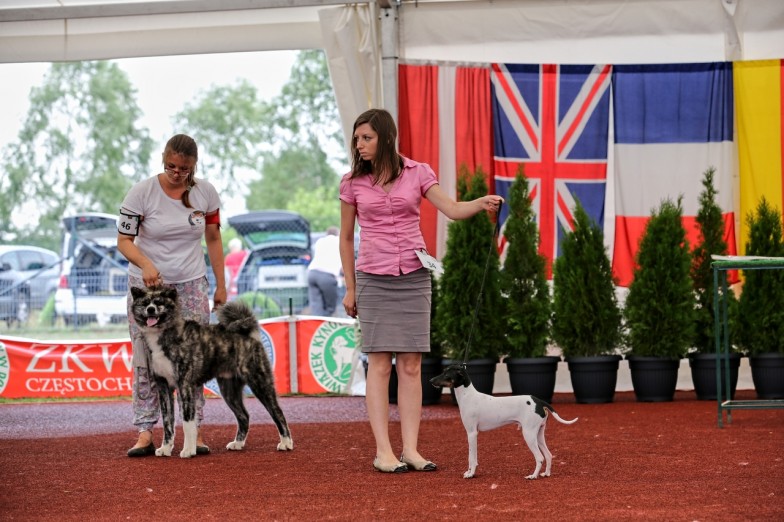 The last week of July and the second one of August was a really special time for us. This was the time of show debut of Pearl Iris JP Tsubasa.

First on July 25th in Konopiska, Poland we organized II Speciality Show for Japanese Breeds in Poland. Two leading specialists in Japanese breeds Ichiro Ishikawa and Toshinori Omura accepted our invitations and came from Japan especially for show in Konopiska.

During the show, besides of Tsubasa, Keru was showed as guest. As I was one of the organizers I couldn’t agree to judge Keru at honorable ring.

Judges from Japan really liked Tsubasa. It was his first dog show ever. We still have to do lots of work learning how to walk and stand correctly but most of all socialization trainings. Nevertheless it was really good debut.

Besides of nice description (nie znalazłem jak jest w nazewnictwie wystawowym opis psa od sędziego – dałem po prostu description) and Very Promising grade, Tsubasa got third place as best puppy in the show. Keru, after getting BOB, on the main ring was showed only as breed and got honorable last place without judging.

Two weeks later we visited two dog shows in Bedzin, Poland with Keru and Tsubasa. The first show was the National Terrier Dog Show and both our dogs took part. They were graded by Bulgarian judge Lemmer Torsten. Tsubasa was a little bit feared at the table but at the ring he walked really great. As for his second dog show he was splendid. Keru, as always, did his good job. Tsubasa got Best Puppy and Keru got BOB.

The second day was the National Dog Show where we showed only Tsubasa. It was the next step of our preparations to larger shows. According to judge James Byrnes from Ireland Tsubasa looked great static and moving but at the table he was really afraid and did not allow for the touch. The judge told us that we would get all good grades but because of that he had to give us just Promising grade.

It was a really good training for Tsubasa before upcoming European championships so we are very pleased with his performance.