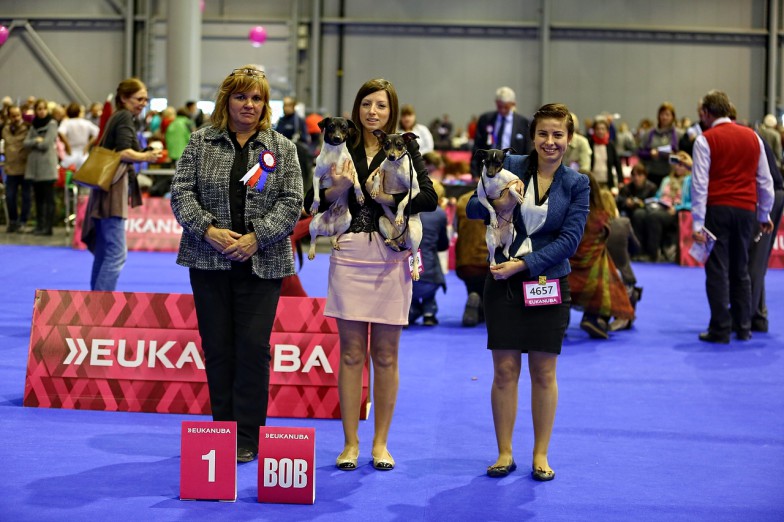 On Wednesday, October 22, we went to Brno to take part in the National Dog Show and the Euro Dog Show. We arrived without any problems and afer the night we were ready for the show.

On October 23 there was held the National Show. Our three Japanese terriers: Fuji, Bayka and Keru took part in that show. The judge came from Norway, a specialist in everything that is not in terriers Mr. Per Iversen. A little sad that the day before the EDS, the organizers have assigned us to be judged by a person who had no idea about Japanese terriers. The judge hurt us. Fuji – Junior World Winner from Helsinki who received BOB from the Japanese judge – received from the Norwegian judge a very good note! The judge said that she is not his type (and he stated it during the judging!). Bayka, World Champion and Asia Winner from Tokyo, where she won with other Japanese females by Japanese judges, got only the excellent note without any titles. He liked only Keru and gave him BOB.

We didn’t like the irreverent approach of the judge to Japanese terriers. Therefore, before the Euro Dog Show we had a slight stress.

During the EDS we were judged by the specialist in terriers, Mrs. Iveta Novakova from Czech Republic. It was clear that the judge has the approach to terriers and writing directly, feels them. Keru was the first. As you know, Keru is a pro. He showed up beautifully and the judge had no doubt to give him CACIB, thus the title of European Winner. The next was Fuji. Fuji showed up as nicely as the day before. She received JCAC, JBOB and Junior European Winner title. Last was Bayka, who also presented very well, she won CACIB and the title of European Winner.

Comparison it was only a formality for us, because we picked up everything. Keru took BOB and Fuji received BOS.

We presented Keru and Fuji on BIS. Zuzanna Ligocka showed Fuji. I’d like to thank her for helping us. They both presented very well. Keru looked fantastic during BOG. Perhaps in a few years we will see a judge who appreciate the beauty of the Japanese terrier on BOG on suchbig shows.

Bayka completed her Interchampionship during this show.